Confessions of an Audiobook Rookie 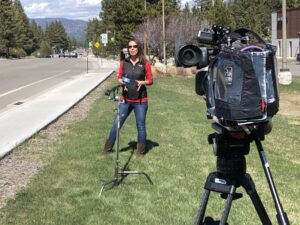 In recent years, I’ve worked hard to segue everything I learned as a reporter into a whole new way of working as a voice over talent. Lose the broadcast voice, slow it down, have some personality, play with your ‘sound’, learn how to edit, how to pitch, how to market yourself and find your own work. It has been an education. A test I have sometimes passed, sometimes failed, and many times reshaped and retried until it worked a little better. But narrating an audiobook. That was different.

I’ve always thought it would be fun to be an audiobook narrator. I was that mom who read to my kids at night, adopting a different voice for every character and judging my success by the giggles elicited. Who cares that the voices were goofy, my acting was poor (at best), and I sometimes forgot who was who and mixed all of the characters up in a ridiculously pathetic way. It was fun! Such was my thinking when deciding to narrate a novel. I had already worked on self-help and business books … but those were easy. There were no characters. Characters, well they make all the difference.

I recently took part in a small group session with a real voice “actor”, Townsend Coleman. He was the voice of Michelangelo in Teenage Mutant Ninja Turtles, Wayne Gretzky on ProStars, and a plethora of other really fun characters. To make matters more intimidating, there were nine other really impressive students … like the guy who is the voice of Santa for Elf on the Shelf. I’m not joking. These were actors. I am a recovering reporter. Sigh.

I’ll spare you the ugly details and just admit the truth: It took me a year to complete my first audiobook novel. A full year (a little more when you consider the time spent waiting for the editor to finish up and ACX to approve the project). Most of the delay was entirely my fault. I hate to hear my voice. I admit it. I’m also a perfectionist. I can almost recite chapter one in its entirety without the manuscript. I struggled with the pacing (it’s much slower than a news story, where you have to talk fast to include all relevant information in the time allotted). I struggled with the tone (I’m an upbeat person. The protagonist, Marjorie Veil, was in the middle of a life crisis). I spent full days in a four-foot by three-foot, black foam and audio blanket-covered walk-in closet. Just me and a microphone.

I emerged from my audio “cave” with a few decisions made: I will never sound perfect in my own mind, but the character I’m voicing, she’s not perfect, either, and neither is the listener. There will be haters no matter what, but if I’m focusing too much on what the critics may think, I’m doing no favors to Marjorie Veil or the author who created her. Finally, at the end of the day, the end of my career, the end of my life, I will not regret the things I tried, even if my first several attempts were awful. I will regret the things I didn’t try.

So, on the eve of the launch of the audiobook version of Between Will & Surrender, the first in a four part book series “Enter the Between” written by author Margaret Van Steyn Duarte, I’m holding both hands over my ears, closing my eyes tightly and singing “la la la la la” at the top of my lungs. But I’m doing it, and I’m super excited.

Intrigued by this story of spiritual self-actualization? Download now on Audible, Amazon and iTunes. http://adbl.co/3ha9mq9